355 - A code name for concentrated action with international superstars Jessica Chastain, Penélope Cruz, Lupita Nyong'o, Diane Kruger and Bingbing Fan united as saviours of the world! 355 is the first part of a new franchise with a never-before-seen squad with a special kick. MISSION IMPOSSIBLE meets BOURNE IDENTITY is how Jessica Chastain describes this spy action thriller where the All Star female agents, otherwise bitter enemies, pull together to use their extensive talents and skills to prevent the worst from happening. For the world is about to descend into chaos. Strangers and enemies become friends during the mission, unstoppably pursuing their goal: As a newly formed special unit with code name 355, to prevent a global organisation from acquiring a weapon that will plunge the tottering world into total chaos. 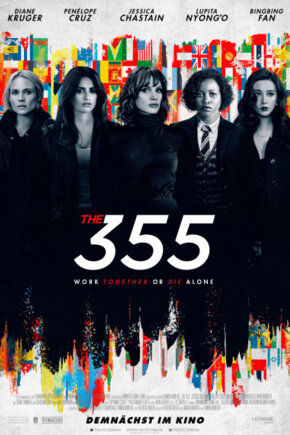 See the reviews
Book tickets
The 355
Monday, 8. August 2022
21:18
Tickets
CHF
Shopping cart
We use cookies in order to make our website as easy to navigate as possible. Further information can be found at here.