One film leads to another

With around 750,000 visitors a month, cinema.ch is Switzerland’s most popular cinema portal. In addition to the cinema programme, it offers film fans the chance to check out reviews, trailers and competitions revolving around films currently on the big screen, while news and interviews with stars reveal what's happening both on and off camera. If you’ve managed to pick a film from the dizzying array on offer, you can book tickets for your cinematic adventure through Cineman itself. And after you've seen the film, you can discuss what you've seen and experienced with members of the Cineman community. One film leads to another: your next trip to the cinema can't be far off!

Cineman is also available as a mobile app (for Apple or Android) in German, French and English. 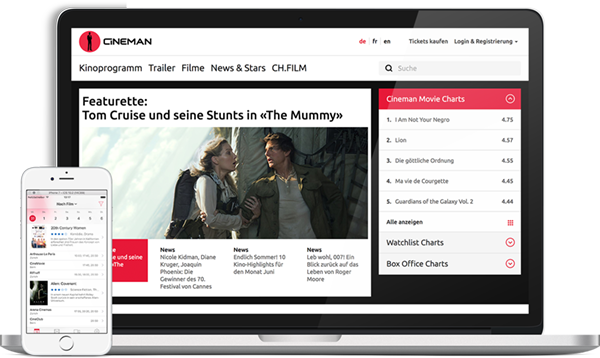 Tickets
CHF
Shopping cart
We use cookies in order to make our website as easy to navigate as possible. Further information can be found at here.